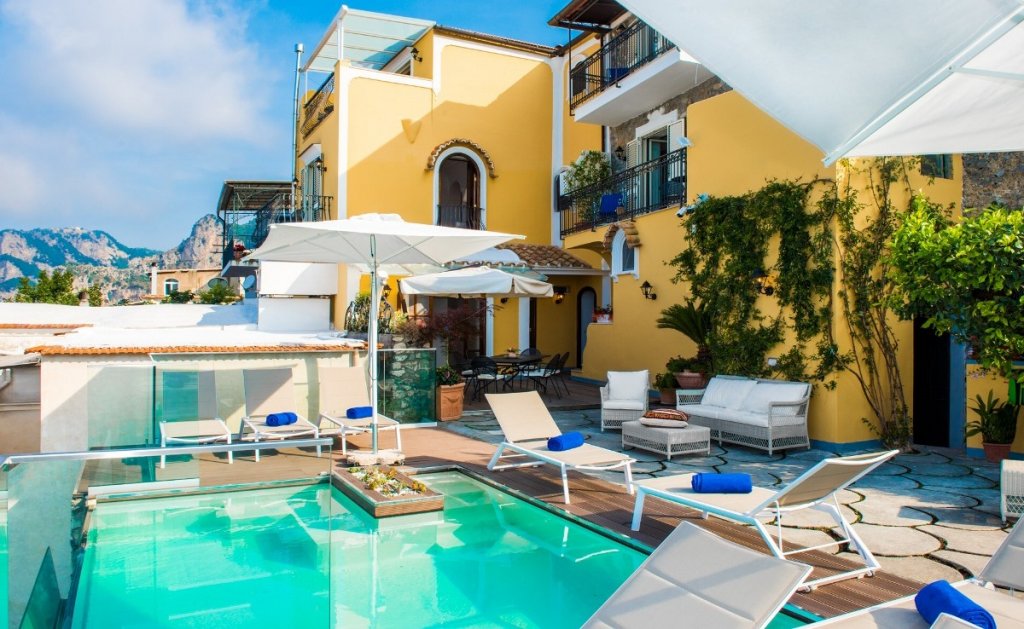 A sumptuous three-story villa overlooking the sea in the centre of the stunning Amalfi coast.

Location and Surrounding Area. The sleepy ancient hamlet of Nocelle, the closest centre to the villa, is ideal for enjoying a peaceful stay far away from traffic and noise. The villa is also just 2.5 km from the world-famous Positano. Once a sleepy fishing village, Positano has now become a chic and stylish holiday destination popular with the global jet set. The historical town of Amalfi, with its glorious past as one of the major Maritime Republics in the Middle Ages that bought opulence to the whole area through its international trade connections, is a mere 20 km further along the coast. Amalfi today is a graceful town with bright, colourful buildings and a charming port, and is buzzing with shops, bars and restaurants.

Ravello is another of the gems of the Amalfi coast. A UNESCO World Heritage site, it is set back a few kilometres from the coast on a lush hillside with spectacular views, and owes its popularity with tourists to its charming main square, little streets and elegant historical villas – most notably Villa Rufolo and Villa Cimbrone. In the summer, the town is animated by the season-long Ravello Festival of Classical music, inspired by one of its many renowned former residents – the composer Richard Wagner. Countless other names from the world of the Arts have had associations with the town, including Virginia Woolf, Greta Garbo, Gore Vidal, André Gide, Joan Mirò, Truman Capote, Tennessee Williams, Graham Greene and Jacqueline Kennedy.

The ‘Li Galli’or ‘Sirenuse’ islands are a small archipelago of three islands: Gallo Lungo, Rotonda and Castelluccio.  Legend recounts that they were once the abode of Sirens who tempted passing ships with their song. Gallo Lungo is also notable for being the last residence of the ballet dancer Rudolf Nureyev. The islands are private property and cannot be visited, but the waters surrounding them are ideal for swimming in the crystal clear water. At a distance of 17km in the charming bay of Conca dei Marini, The Emerald Grotto (Grotta dello Smeraldo) is one of the natural highlights of the Amalfi Coast. Another site well worth a visit is the Natural Marine Reserve of Punta Campanella, which takes in the entire coastline stretching for 30 Km from Punta del Capo (Gulf of Naples) to Punta Germano (Gulf of Salerno) and including a charming series of grottoes, inlets and bays.

The Property. Villa Urania is a splendid and luminous three-story villa sleeping up to ten guests, situated on a promontory facing the sea with outstanding views of the Amalfi Coast. The Villa is a 250-square-meter building featuring a private swimming pool, terraces, patio and garden. The villa is in the countryside, approximately 5 km from Positano, with a local restaurant just a few metres away and a convenient grocery store at 300m. Like many properties on this coast, Villa Urania is below the street level, accessible by descending approximately 70 steps. Public parking is available at about 300m distance. The villa includes a 3m x 4m heated swimming pool, equipped with tables, chairs, sun umbrellas and sun loungers, with a breath-taking view of the sea. The pool is open from early May until mid-October.

The living room is elegant and bright, with a satellite TV, sofa and dining table for up to ten guests. The kitchen, which has direct access from the living room, is equipped with a four-burner gas cooker, an electric oven, a refrigerator with freezer, a dishwasher, a microwave oven, an Italian-style coffee-maker, an American-style coffee-maker and a kettle. The kitchen also leads directly onto the patio and pool.

The first bedroom is on the ground floor with access to a patio with a view of the sea. The room has a large double bed, satellite TV and air conditioning/heating. The en-suite bathroom, which also has access to the living room, is fully equipped with a washbasin, WC, a fully enclosed shower and a hairdryer. 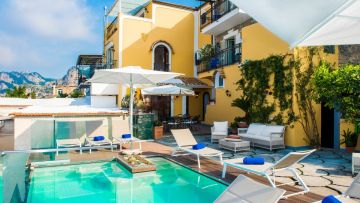 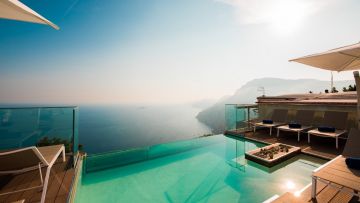 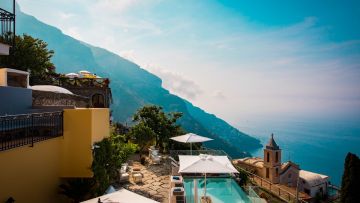 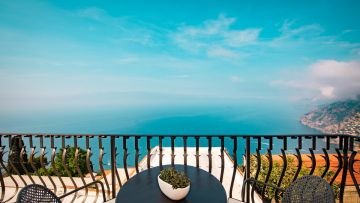 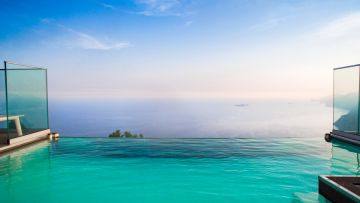 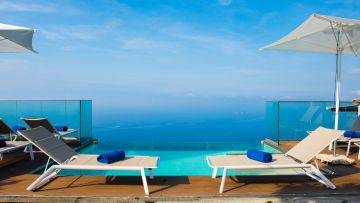 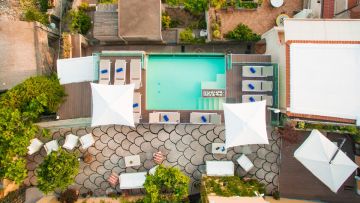 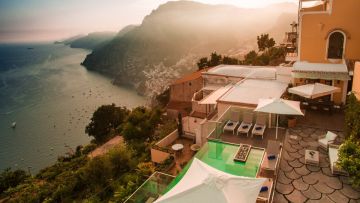 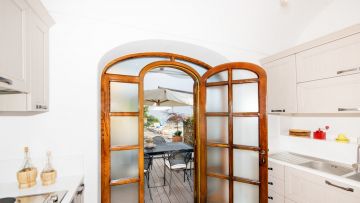 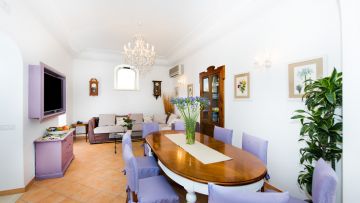 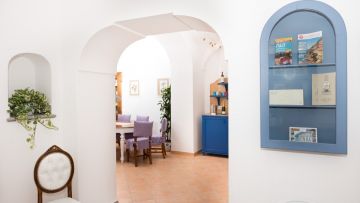 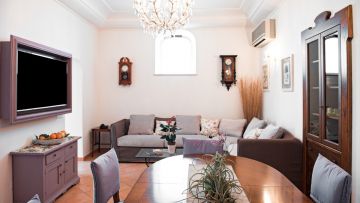 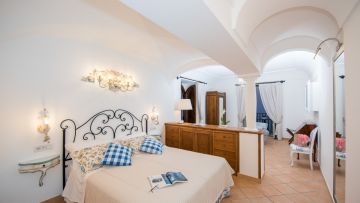 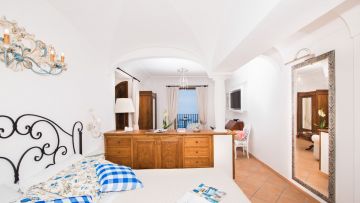 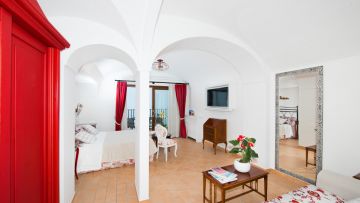 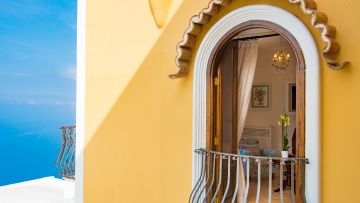 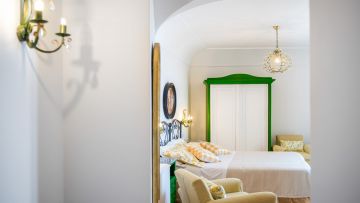 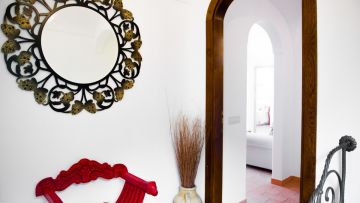 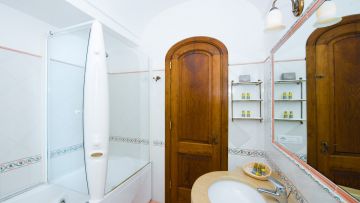 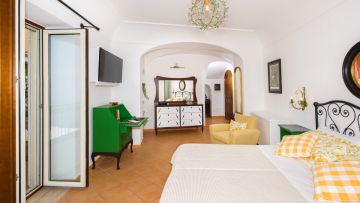 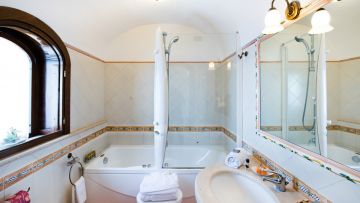 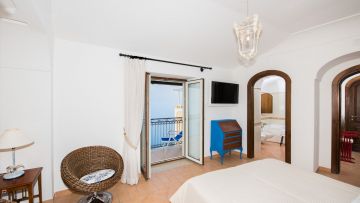 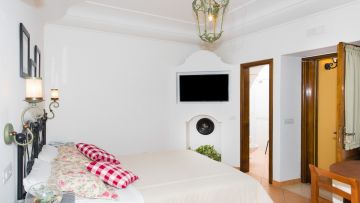 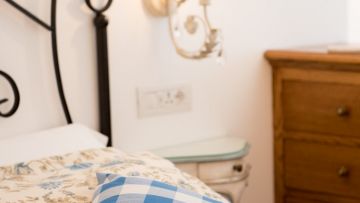 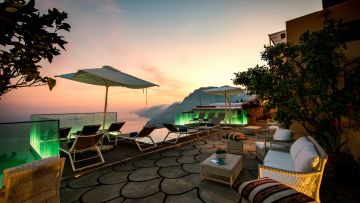 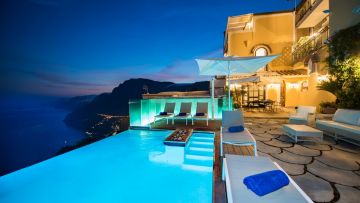 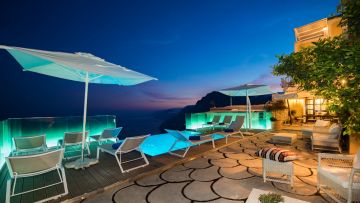 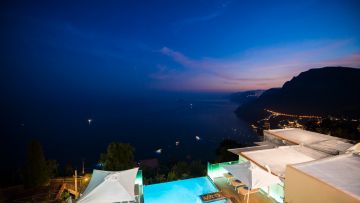 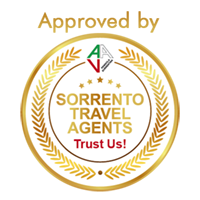